The future is looking bright in our area. Chard has already unveiled its candidates for the County Council elections with Tim Eggins and Serena Wootton standing in the South and North divisions respectively. They are not strangers to the election race as both stood for Chard Town Council in 2019, Serena winning her seat, Tim missing out by only 11 votes. They pulled in nearly 500 votes between them even though the Chard Green Party group had only formed the year before.

Note that in 2017 we did not stand a Green candidate, but the interest in the Green Party at this southernmost tip of South Somerset means that we can expect a good showing at the polling booths - your vote will not be wasted! 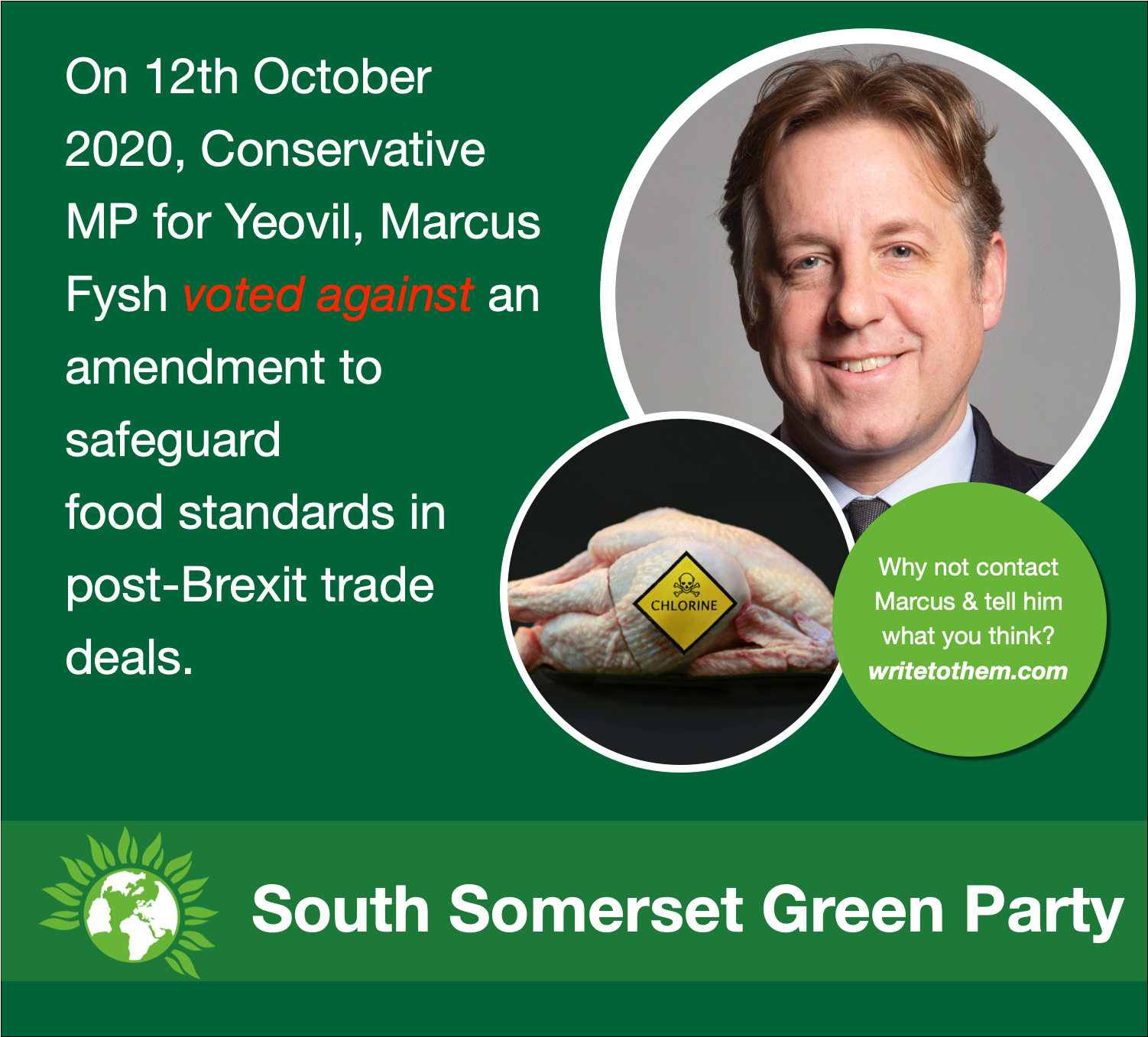 Marcus Fysh voted against the recent amendment to the agriculture bill that would have made it a legal requirement for future food imports post-Brexit to match UK food standards.

In his column in the Western Gazette (October 15th), Marcus "reassures" (sic) us that:

The government will not be lowering standards affecting our food, animal welfare or our own great produce.

His reasoning is that:

With regard to the first point, transitional arrangements could be put in place to encourage the raising of environmental and animal welfare standards through trade with developing countries.

The second point presumably relates to countries like the USA - and we all know what reasonable and distinct regulatory frameworks he has in mind. The Government clearly wants to maximise its room for manoeuvre in negotiations on a US trade deal. Can you see Boris Johnson treating chlorinated chicken as a deal-breaker?

On the final point, we don't see how a trade deal that creates a market with a lowest common denominator approach to environmental and animal welfare standards benefits British famers or consumers. In contrast, we think that the UK should lead the way in driving up standards, with an emphasis on local production.

Why not write to Marcus and let him know what you think?

Come and have your say!

Your local councillors working for you all year round

The South Somerset Green Party view on the proposed Unitary authority for Somerset is that we need more demoracy not less.

We are opposed to the forced imposition of changes to local government. The pressing social challenges we are facing in Somerset, coupled with the critical need to respond to the climate and ecological emergencies, mean that the last thing we need is to be distracted by a long-winded and costly re-organisation that will solve nothing in the short term.

For a more detailed summary of the issues you can download a position statement from the SSGP here.

The district councils have also put together alternative proposals for ways they can increase collaboration immediately.

Finally, if like 95% of us you find local government confusing and difficult to navigate, here is a very useful and readable summary of the proposal by Paul Jones from the Somerset County Gazette.