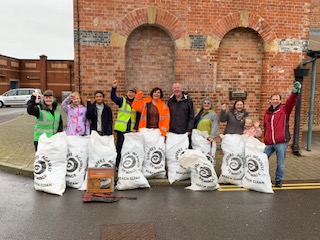 The litter pick was organised by myself and the Plastic Free Chard team, as before we organized four teams to each leave from one of the four Chard Town Signs and litter pick while heading toward the library. This was our third litter pick and we deliberately chose to do it after the Carnival to help tidy the town. The Town Amenities team started out at 6am, focusing on the town centre and along the carnival route, so we focused outside of the town centre, around St. Mary’s Church, Joselyn Park, Sainsbury’s carpark, Tesco crossing and start of Upper Henson Park, B&Q and Factory Shop car parks and along Glynswood and Combe Street.

I was so impressed by how many people turned up on such a wet and windy Sunday morning. A couple of teachers and students from Redstart Primary School came along and we will be taking the litter over to Redstart on Tuesday afternoon to show the pupils how we will sort the rubbish and make sure most of it is recycled rather than it heading for the landfill.

Many of us spoke to passers-by who were very interested in what we were doing, Surfers Against Sewage and Plastic Free Chard, we thought Sunday would be much quieter but the day was busy. Lots of interest around rubbish and plastics in particular, I think the litter picks are cleaning up Chard but more importantly the conversation about plastics is happening across the community. Having teachers and pupils involved means helping to develop knowledge and understanding around rubbish and single use plastic. 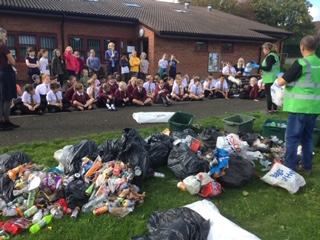 We collected far more glass bottles and plastic cups today, along with several metal car parts, a wooden rabbit hutch door and a metal stand. We also found a lady’s handbag in a hedge along the A30, which was then handed into the Police. In total we filled 12 big Surfers Against Sewage sacks of rubbish. We are yet to sort it as that will be on Tuesday at Redstart School, I can send a photo of us doing this at the school if you are interested, I won’t be able to send it until after 3pm? 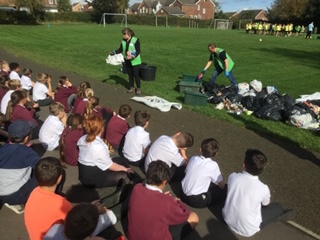 Next litter pick is Saturday 11 January.

We are also planning a “Mass Unwrap” at a Chard supermarket in November.

Just a little reminder that Plastic Free Chard is part of the Carbon Neutral Chard group and was set up as a result of Chard declaring a Climate Emergency back in February.